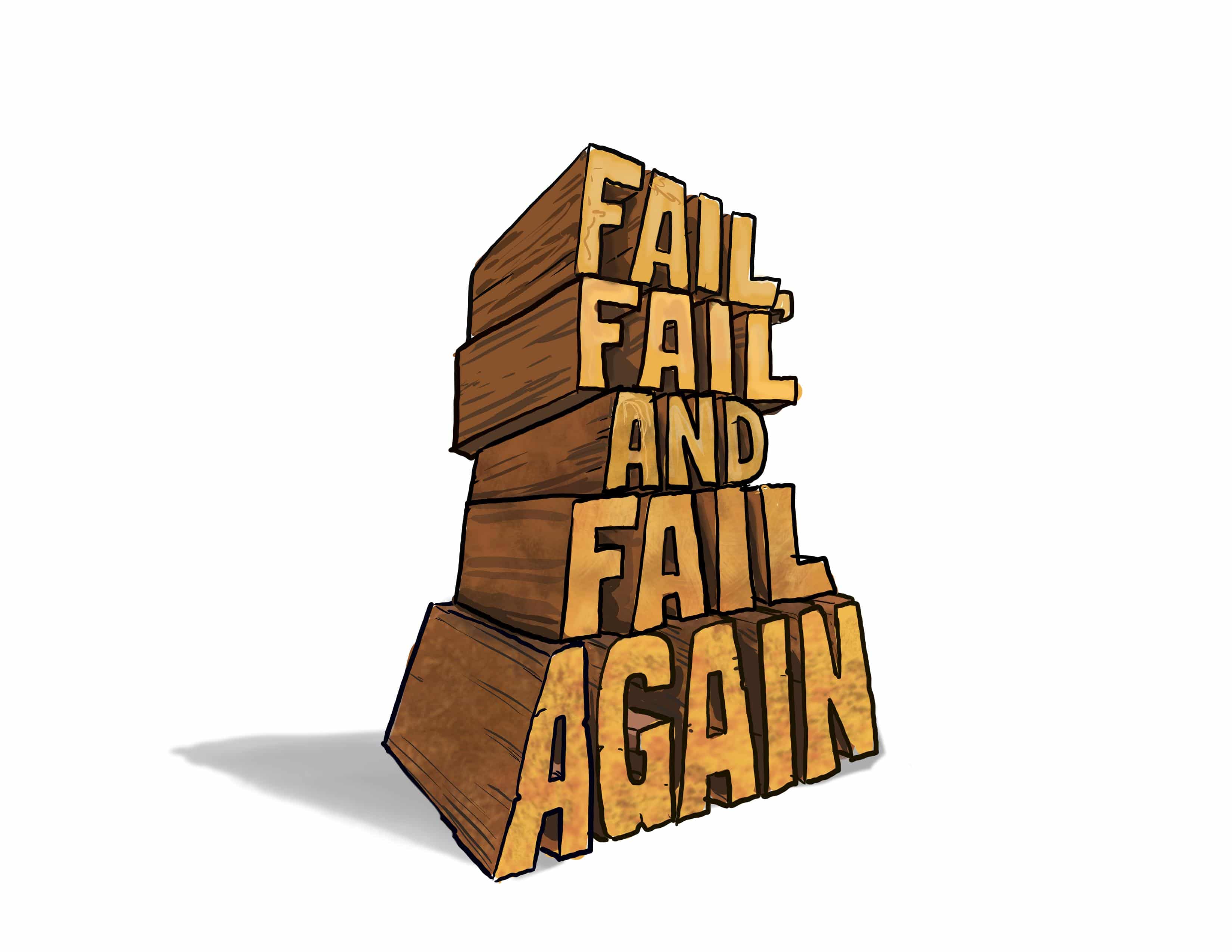 Fail, Fail, and Fail Again – The Secret To Innovation

What do fireworks and cornflakes have in common? They were both invented by mistake — each a botched attempt to do something completely different.

One day, the Kellogg brothers tried to make a simple pot of boiled grain. It’s hard to believe that the brains behind the world’s biggest cereal brand could fail at such a task. But they did. They left the pot on the stove by accident, where it festered for days. When they finally remembered the pot, it’s not surprising that they discovered a dry, thick substance covered in mold. Now, most people would scrape this straight in the bin and chalk it up to failure. But the contents of the pot sparked their curiosity! After some experimentation, they recreated the substance minus the mold, and so the world’s most recognizable breakfast cereal was born.

In Ancient China, a chef decided to stuff saltpeter, sulphur and charcoal into a bamboo tube. Those were common enough kitchen items in those days, and one can only assume it had been a slow day when this particular chef decided to experiment with whatever was on hand. Nobody knows what he was hoping to achieve. All we know is that the dubious mixture exploded, and fireworks were born. (The fate of the experimental chef is unknown.)

Whether it is the Kellogg brothers finding merit in a moldy pot of gunk, or a Chinese chef who has accidentally burnt his eyebrows, our history is riddled with examples of products that were created by accident. In fact, next time you’re at home, open your cupboards. They’re full of brands who have failed, but most importantly, brands who know how to fail with grace, to take their mistakes and mold them into gold.

So, why are we so afraid of failure?

You might be mumbling under your breath at this point, “I’m not afraid to make mistakes, we take risks all the time, I too find moldy substances interesting, I see the merit in failure.”

But that’s probably not entirely true–not if you’re honest with yourself. If you were to take a long hard look at your company and walk down the corridor of stuck ideas, you might notice something entirely different.

“But that’s nonsense!” you might sputter. “We don’t have a corridor of—”

Sorry to interrupt but let me stop you right there. You do. Most companies do. Let me show it to you…

It’s dank, dark, greyish, and the product of boardroom meetings where nobody said a whole lot. Ideas get shoved in, heads bowed, aware of their failure to impress. Occupants of The Corridor of Stuck Ideas were relegated to this dull existence when someone said something like, “it might be a mistake” or “no, because…”

The saddest part is, some of these ideas are not only almost fully formed, but some of them are quite good. Some of them are a good deal more exciting than anything you’re executing right now. Others are missing an arm or a leg, some only need a little dusting off, and I concede that there are quite a few that are unusable. But without a culture that investigates those unusable ideas, you run the risk of losing all these ideas. For one reason or another, you never hear from the ideas in this corridor again. They are never given the chance to fail.

Most of these ideas were cordoned off because of processes, because of red tape, because nobody was willing to see if they could work. Nobody thought to say “Yes, and…” Rather, there was a chorus of “But why?” The people who presented these ideas are probably sulking. Some of them might still dream of these ideas at night.

Why Failure Is the Secret to innovation

Companies need to foster cultures where ideas are treated like good ideas until proven otherwise. Innovation is created by encouraging people to speak up, have mad ideas, and push those ideas toward that big fat scary word: FAILURE.

No great company exists without failure– hard pill to swallow in a society with a taste for hiding our shortcomings. Humans fail every single day, and from that failure, they learn. Just as a child only learns not to touch a hot plate by accidentally burning the tip of their finger (despite being told 905 times that it’s too hot), companies only learn by doing things they have never done before (regardless of being told 905 times that it’s too risky).

Ed Catmull, former president of Pixar and Walt Disney Animation Studios (and arguably one of the most creative souls on the planet), has this to say about our collective attitude towards failure:

“We need to think about failure differently. I’m not the first to say that failure, when approached properly, can be an opportunity for growth. But the way most people interpret this assertion is that mistakes are a necessary evil. Mistakes aren’t a necessary evil. They aren’t evil at all. They are an inevitable consequence of doing something new (and, as such, should be seen as valuable; without them, we’d have no originality).”

What would a company similar to Apple achieve if they waited until their phones were perfect? Not much! Instead, they launch their phones, glitches and all, and push forward innovative technologies with each release. There’s a reason we all flock to get the latest iPhone: they’re always one step ahead. If Apple had launched a “perfect” iPhone the first time around, nobody would have ever rushed out to buy another. They are a success because they have the guts to keep failing, to keep trying new things, and to keep pushing technology forward. We buy iPhones because they’re always bigger and better than before and have features that go beyond perfection; they embrace innovation.

Or Netflix? Their entire history is one of disruption, of rushing to the finish lines while other companies are still trying to figure out if they want to sign up for the race. In 1998 when they first launched Netflix.com to ship movies to audiences in red envelopes in 2-3 days, the idea seemed silly. Friday nights were for browsing the aisles of blockbuster and trying to perfect the art of homemade popcorn. Their website was a bizarre idea, unheard of, and yet it crashed on day one because the start-up’s small team of thirty hadn’t anticipated the traffic. The rest, as they say, is history. Netflix has always had a growth mindset. A move fast and break things approach, which is now such an integral part of our culture that we have coined phrases like “Netflix ‘n’ chill.”.

Perfection does not exist, yet many companies end up stalling their most innovative products in pursuit of it. Take, for example, go.com.

“Go dot what?!?” I hear you say, and you’re not the only one. Go.com is an offshoot of Disney, which has been all but relegated to obscurity. But what the heck was it? To understand that we need to dip back into history and take a look at the 1990s. The rise of home computers meant that the race for internet real estate had just got very real (forgive the pun). AOL and Yahoo were leading the market with their internet portals, and Disney decided to build a portal from scratch to compete, a process that ended up taking close to a decade. They kept waiting, trying to launch the perfect portal. But in trying to create an ideal product from scratch, they hit every roadblock possible, and the project stalled so long that there wasn’t any internet real estate left. While Disney hemmed and hawed, the rest of the world started googling.

So how can you nurture failure?

Who among us hasn’t quipped, “Oh, yes, I’ll create a process for that!” By creating these processes, we are trying to make it IMPOSSIBLE to make future mistakes. Though there’s a lot of worth in using this method as a means to learn from past experiences, our traditional processes have no place in innovative conversations. Just thinking about the process ahead can kill ideas in their infancy. Why not eliminate the need to follow a defined process for every project, and see if loosening the boundaries of what is possible helps encourage people to pipe up with more ideas?

“But the red tape is there for a reason!” I hear you, but if everyone in the brainstorm is thinking more about how to navigate red tape than what would be an innovative idea, your company won’t get very far. If Kevin has an idea that he knows will never get through the current legal red tape, he may be keeping it to himself. With a more open-minded approach from the get-go, leadership can change this. Why not introduce a “rules be damned” manifesto of sorts to get people thinking differently? The Kevins of this world might start to share ideas outside of what the company has done before if they stop thinking about red tape for five minutes.

You hired them for a reason, so have faith in their abilities. Your team wants to solve problems and giving them responsibility and allowing them to make mistakes and learn will foster a culture where failing is considered part of the job, a culture where it’s okay to try new things, to take risks, and where everyone has ownership over ideas– an engaged culture, where people know they can pick themselves back up after a bad idea without any loss of face, is vital to real innovation. The more you trust your team, the most likely they are to speak up and contribute outside the sometimes tight confines of their job description.

4. Adopt the “there are NO bad ideas mindset” for brainstorms

Use icebreakers in your brainstorms. Encourage fun and break down old barriers of communication by using tools like “Yes, and…” “What happens?”, “What if?”, and the Nurturing Tool to establish a new approach to coming up with ideas. Simple tools like these can change the face of brainstorms for the better. No longer will you face the wall of silence as everyone looks at the table in despair and wills the session to end. Even the most reticent members of your team will suddenly be full of enthusiasm.

With these steps and tools, and a little dose of willingness to fail, your team will be creating new and innovative ideas almost overnight!